Early November and my early morning thoughts focus on fireflies.  Not really a summer nostalgia or wish, just fireflies.  I woke with their glow, lie awake with “why?”   OK, time to move to the keyboard and test this hand of mine and its recovery progress with some tappy-tap.  Glances outside beguile the date – bright blue sunshine betrays the 30 something temperature and promises from weather prognosticators that rain comes later today and maybe a flake or two later in the weekend.  Where in the word lies my brain this day?

One of the great pleasures in writing lies in creating a new way to observe some of the same old same old.  For me, fireflies don’t dance or flit merrily about the nightfall on the yards and meadows, between the hickories and poplars, into the twine of branches shadowed with tents of leaves.  Rather, they seem a waltz, a one-two-three, one-two-three blinked weave of meaningless roam, yet art on the dark canvas.  Here and gone, there and gone, one-two-three turn and do it all again.  All so slow – slow enough that patient hands quite easily capture a few for that “let’s make a lantern with a mason jar” project.  Punch a few holes in the never to be pop sealed lid, drop a few gleams inside, screw on the cap—-and the lights don’t happen.   The music of the night disappears, the captive fireflies fail to flicker.  Just fade, fade.  And gone.

Funny, but not so funny how so many insist that we must capture to “save” – be it the moment, the beauty, or the life to put on display for others to “enjoy”.  We have to have that firefly so its light becomes ours.  We have to have that brown with big white spotted wings moth to pin to corkboard and display its beauty.  We have to have that cheetah for its sleek hide or to view in the confines of a zoo’s cage.   Most often, as we all learn, the capture generates the fade, the loss – the gone.  Herein I find a think.

Don’t we all, haven’t we all, chased faith?  You know, that gleam of heaven promise just over there, no up here, no there, here – oh golly…  Yes it glows, not a flicker firecracker popping into a seconds’ long arc of yellow-pink-white-red starbursts and booms, but a waltz of light, one, two, three – on, off, on – across the greyed grass, into the tree line, above the pine tops. We must get it in a jar, see it – ahhh, yes!  There it is, caught in the church, in that building behind the lid of doors, in the sanctuary up by the altar.  But when we go, when we seek, faith seems faded there, there in supposed captivity to be held on Sunday morning and known in the grace received at the communion rail.   I sense a different truth.  I do not believe Jesus came to our humanly world to occupy or be occupied.  A church building exists as a place to join with those of like belief to reinforce and share in a collected happiness the peace beyond understanding.  Faith has to be solidly in our heart to make a “church”.  How does that verse go – “Wherever two or three are gathered in my name…”

Christ came to become a light of hope.  At 12, he went to the temple to “be about His Father’s business” and amazed elders with insight and knowledge.  He moved on.  He was challenged in life by temple members seeking to trick and destroy, and he amazed the “wise” with the simplicity of response.  And He moved on.  He had a message, not the deep, guilt provoking, mostly impossible to accomplish laws of the Old Testament, but a new hope.  “Believe in Me and know the Grace of God, the Father.”  Hope.  A light that followers tried to hold as He moved on.  They failed to initially understand that with faith, hope becomes a glowing assurance.

Jesus came, in my belief, to offer a choice.  Born to die with the entrapment of our sin, He rose from the cage of hell to ascend to the light of His Father.  In faith, we have that assurance of following Him home.  Our faith cannot truly live inside four walls, even if the walls are adorned with the stained glass travel from creation to the final days.  We must choose faith, act on faith, live our faith as best as a human can.   A song comes to mind.  “This little light of mine…” 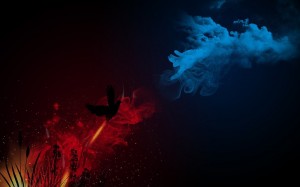 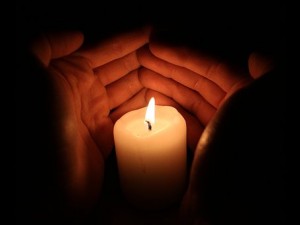